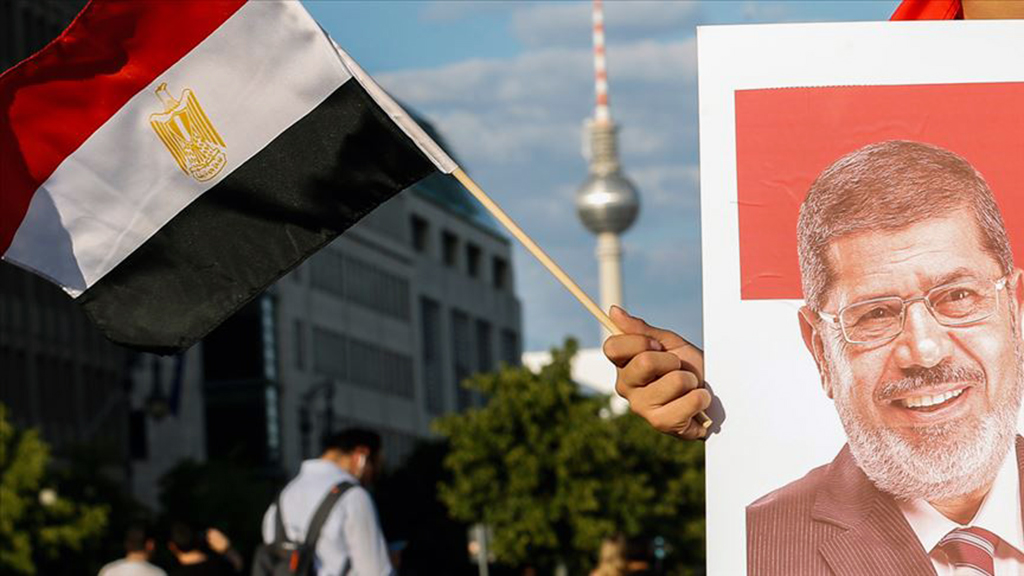 All the killers of Morsi

One wonders if the murderers of martyr Mohamed Morsi, the legitimate president of Egypt, are only those who watched on without interfering as he struggled to breathe for 20 minutes after suffering a heart attack in the sinister cage of that sinister court. Or perhaps the real perpetrators are the puppet masters that hold the strings of these killers. What about the millions of members of the Tamarod movement who filled Tahrir Square in 2013 in support of the scheme to overthrow President Morsi with a coup d’état?

Are they happy now?

The elected president of the Egyptian people died in a cage after six years of captivity and torture. Will they be able to understand that what has been lost in that cage is not only the life of martyr Morsi but also Egypt’s opportunity to regain freedom, Egypt being the well-established state of the Middle East?

Do they still not grasp –six years on– that what has been offered to them through Sisi is nothing but bondage? For sure, if they had appreciated this fact, they would have opposed the isolation and persecution suffered by President Morsi. Let alone not opposing, they were, knowingly or unknowingly, complicit in the plots of those who schemed to topple him, and because of that God deprived them of an opportunity to save themselves from captivity and oppression. The magnitude of their crimes blinds them from even recognizing their deprivation, which suggests that this bondage, which has been consolidated through the “coup official” Sisi, will continue for longer. If the supporters of Tamarod want to be saved from this catastrophe of bondage into which they dragged themselves along with the whole of Egypt, they must first ask forgiveness of martyr Morsi and all of the martyrs of Rabia Square.

Who are the instigators?

The suspects that we find before us while trying to identify the killers of martyr President Morsi are the very countries that instigated the coup of 2013. In other words, everybody knows that Sisi and the Egyptian army are merely the ostensible perpetrators in front of the curtain. There is no doubt that the instigators of the murder of Morsi and the Rabia Square martyrs are the USA, the UAE, Israel, Saudi Arabia and a number of other Western countries.

Nor is there any doubt that what these instigators want is to prevent Egypt from being ruled by leaders elected by its own people; that is, what they ultimately want is to make sure that Egypt never becomes a free country since Egypt is too important a country to be left to its own devices or be allowed to be ruled by the will of its people. The largest country in the Arab world, Egypt is also one of the most important states in the Islamic world. It is situated right next to Israel “the precious”. The kind of consequences Israeli aggression would most likely have to bear in the face of a long-lived Muslim Brotherhood administration in Egypt are very obvious. How would a Morsi-led Egypt, one wonders, react when Jerusalem and the Golan Heights were handed to Netanyahu on a silver platter by U.S. President Trump?As for Sisi the “coup official”, he merely discharged the duty he was assigned and turned a deaf ear to the unlawful policies of the U.S., and now even supports the so-called “Agreement of the Century”, which envisages the expulsion of Palestinians from most of the West Bank.

Another service rendered for Israel by the other two Arab countries –namely, the UAE and Saudi Arabia– which also support the “Agreement of the Century”, was their shouldering of the financial burden of the coup staged against Morsi. They turned on all the money taps so that Sisi would be able to continue down this path unimpeded and rebuild the dictatorship regime in Egypt. They did not want the Muslim Brotherhood movement to liberate Egypt and its people because the spread of freedom in the Arab world could set a dangerous example for their own peoples, and this was the last thing they could have wanted. They did not want the Egyptian people to be free, nor did they want to see a free Egypt, since they perfectly knew that a free Egypt would not side with the alliance today’s Egypt is trying to forge with the U.S. and Israel in the Middle East, but would oppose it. The alliance that today’s Egypt is trying to establish with Washington and Tel Aviv is an ill-omened one that is sure to work against the interests of the Middle Eastern peoples, therefore a free Egypt ruled by free Egyptians would definitely not have become part of such a sinister structure.

It was for these reasons that the Riyadh and Abu Dhabi administrations instigated the coup against President Morsi and supported Sisi, the “coup official”, both during and after the coup. And this support persisted until the death of Muhammad Morsi in the cage in the courtroom. The extent of the support that these two countries provided to the Sisi-led coup might also be appreciated in view of their hostile policies towards Qatar and Turkey, two countries that have been consistently critical of the coup.

Role of U.S. and Europe

Two particular dimensions of this issue stand out regarding the U.S. and Europe, which are the other instigators of the murder of President Morsi: how the policies they pursued during and after the coup should be evaluated in terms of their interests, and what these policies mean in terms of democracy, rule of law and human rights, values that these countries are constantly bringing up.

Obviously, the attitudes of the U.S. and European countries towards Egypt is shaped by power politics. We should never forget that such values as democracy and human rights, which the U.S. and Western European countries so often instrumentalize to meddle in the internal affairs of other countries, were completely disregarded when Egypt’s elected president was being overthrown. When democracy and human rights as well as almost all precepts and principles pertaining to the rule of law and international law were being trampled in the period that led up to the coup and in its aftermath, Washington and most European capitals either openly supported the coup through their encouraging statements or remained silent, which meant their tacit approval of all the violations committed.

This power politics-oriented attitude of Western countries is not surprising for those who are familiar with and follow these countries’ general policies. Whenever they had to choose between their own interests and values, such as democracy and human rights, they went along their short-term interests because of their problematic perception of what their interests should be. The reason I use the phrases “problematic perception of interests” and “short-term interests” is to lay bare the fact that, had these Western countries been able to identify their interests accurately and in a far-sighted manner, they would have seen that the policy they have been pursuing in Egypt will disastrously backfire against them as well in the medium and long-term.

It is apparent that these countries are too shortsighted to predict the results of the traumatization of the larger segments of the Egyptian society (an Eastern Mediterranean country with a population of 100 million) because of the suppression of their preferences in such a degrading way and because an elected president was simply left to die in a cage in a courtroom after being isolated in a cell for years, during which time his health problems were completely ignored. Their complaining of radicalism and terrorism -the stage after radicalism-, although it is they themselves who radicalize people in this manner, is actually a sign of narrow-mindedness.

If they are not so narrow-minded as to not realize that they promote and facilitate terrorist organizations such as Daesh and al-Qaeda by suppressing an Islamist movement, such as the Muslim Brotherhood, that has always avoided violence, then they must be malicious enough to desire such a result.

At this point, it is also necessary to underline another fact: there are segments of Western societies uncomfortable with the policies of their administrations stemming from these pathological perceptions of Egypt and countries similar to it, with which they completely disregard fundamental values such as international law, democracy and human rights. However, unfortunately, the ability of these right-minded segments to make themselves heard is weakening by the day, and those who have adopted unprincipled politics as their guide are becoming more and more predominant.

US needs to leave Obama legacy behind to move forward with Turkey
Next
Loading...
Loading...
We use cookies to ensure that we give you the best experience on our website. If you continue to use this site we will assume that you are happy with it.Ok