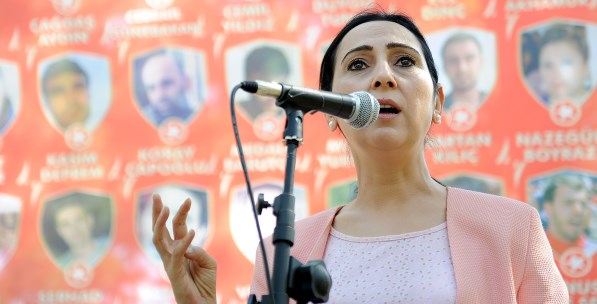 While being politically restricted by the PKK's ending the cease-fire to cancel the reconciliation process, the HDP, again because of the terrorist organization, is losing those who voted for them in hopes of peace.

There are no ifs, ands or buts in politics. Sometimes you find a great opportunity and, if you drop the ball, it is often impossible to right your wrongs.

The Peoples’ Democratic Party (HDP) delivered a strong performance in the June 7 parliamentary elections, but the PKK’s game plan made it impossible for the Kurdish nationalists to develop a national platform. By unilaterally ending the two-year cease-fire and pushing for autonomy through violence, the organization left little room for civilian politics.

Ahead of the parliamentary races, certain parts of the opposition had hailed the HDP as a vanguard of democratization. It made little sense, of course, to expect a political party reaping the benefits of violence to promote democracy. The PKK, furthermore, had no intention of letting civilians take over the Kurdish nationalist movement’s leadership. Nowadays, the HDP seeks to resist the PKK leadership’s push to boycott the upcoming early elections.

The Kurdish nationalists in Turkey made a serious mistake when they simultaneously adopted two distinct strategies. The first road map entailed a stronger presence in northern Syria while using the peace process as a smokescreen to facilitate the buildup of weapons in southeastern Turkish cities. The second plan involved a thinly-veiled fight against the political leadership in Ankara, including President Recep Tayyip Erdoğan and the Justice and Development Party (AK Party), which had made the peace process possible. The Oct. 6-8 urban revolts in 2014 were the turning point in the relationship, but the PKK leadership waited a few months to officially end the cease-fire. In other words, the short-term benefits of fighting the AK Party government, challenged at home and abroad, tempted the Kurdish nationalists away from the disarmament talks. The PKK mistakenly believed that it could grow stronger by adopting the Turkish opposition’s charges of authoritarianism against the government.

It was the PKK’s adoption of both strategies at the same time that made the disarmament talks impossible. At this point, accusing the AK Party of ending the peace process due to its inability to maintain a parliamentary majority offers little to the Kurdish nationalist movement – with the exception of self-righteousness, an opportunity to legitimize violence and praises from the Turkish opposition.

Was there any other way? Of course. The HDP leadership could have chosen not to vilify the AK Party on the campaign trail to keep the hope of peace alive. Not pushing for autonomy in the southeast would have been another way of supporting dialogue. The HDP-controlled municipalities had a perfectly good opportunity to have a strong influence on local affairs, after all. The anti-Erdoğan arguments, used in reasonable amounts, could have further empowered the HDP to prevent the Turks from having second thoughts about the merits of the reconciliation process. Likewise, the advocates of dialogue within the AK Party would have had a better chance.

In the end, however, the Kurdish nationalists failed to grasp that the AK Party was the only political movement willing to push for concrete progress with regard to the Kurdish question. Democratic reforms alone, after all, are not enough to resolve the issue. There is a clear need for a discourse of coexistence and a common future. The AK Party leadership, willing to ignore the nation-state’s fears, could have facilitated the PKK’s disarmament with reference to a common civilization to integrate the Kurdish community into the mainstream – an issue that the Kemalist founders failed to address.

In light of the above, the Kurdish nationalist movement’s struggle against the AK Party represents a serious challenge for their relationship with the entire country. If the movement’s leaders are looking for a common future with Turkey, they need to answer the following questions: Could any political movement but the AK Party show the courage to work with them? If so, will the Kurdish nationalists cooperate with the ultra-

Who are Displeased With the Striking of ISIS?
Previous