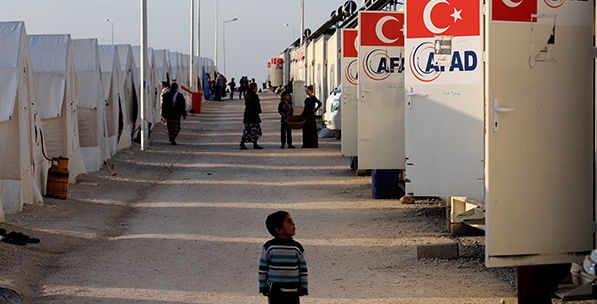 There is something almost legendary going on in Turkey in regard to the Syrian refugees. This amazing work by AFAD and local nongovernmental organizations deserves better international recognition.

It is not possible to understand the true extent of the humanitarian disaster in Syria without hearing the stories of Syrian refugees. Even then it is difficult to imagine the feeling of pain, horror and violence that these refugees have gone through over the last four years of the conflict in Syria. Now there are more than 6 million Syrian refugees living in difficult conditions, mostly in Syria’s neighboring countries. Lebanon, Jordan and Turkey are handling the biggest burden.

In the last two weeks, as a part of a project I had a chance to visit different refugee camps in southeastern Turkey alongside the Syrian border, including the ones in Mardin, Şanlıurfa and Gaziantep. More than 1 million of these refugees are living in the camps and different districts of these cities. Şanlıurfa, for example, which has the longest border with Syria, is home right now to more than 500,000 Syrian refugees. Almost 200,000 people who escaped from Kobani and other cantons in the last six months after the Islamic State of Iraq and al-Sham (ISIS) attack found refuge in Suruç, one of the towns in the south of Urfa. While the international community was criticizing Turkey for not doing anything to save Kobani, almost all of its residents found shelter in Suruç. Gaziantep, another city that has been frequently mentioned by Western media outlets, mostly regarding foreign fighters, is now hosting 450,000 Syrian refugees.

It is difficult to imagine how these large numbers of refugees can change the social structure and demography of these cities. Kilis, for example, another border city in the region, has more Syrians now than local population. Among all these refugee movements in the region, one can be curious how these cities can absorb such a high number of people without a major upheaval or another humanitarian disaster. The most important aspect is of course the local people in these cities. They did not only welcome the refugees, but also shared their food and houses with the people who escaped the conflict. Despite economic and social tensions that such a size of refugees can bring to any city in the world, the residents of these cities have tolerated problems in their neighborhoods and acted compassionately. This can be seen through the works of local civil society organizations and endowments in these cities. In a very short period of time new nongovernmental organizations emerged and became operational in order to assist different aspects of the needs of Syrian refugees. Some provide hot meals, others shoes and clothing and some other local organizations devoted themselves for the education of Syrian children.

In addition to the people of the region and their local nongovernmental organizations, the Disaster and Emergency Management Authority (AFAD) is the most visible and most frequently mentioned organization in the field. AFAD is hosting more than 220,000 refugees in various camps, and with the continuation of the conflict in the region there are constantly more refugees coming to these camps after the rise of ISIS and siege of Aleppo by the regime of President Bashar Assad.

Most of the Syrians who left Syria in the first days of the conflict there thought that the conflict would end fairly quickly, just like the revolutions in Libya and Egypt, and did not bring many of their possessions from Syria. However, the conflict has been drawn out and, with the increasing needs of the refugees, the first groups that began helping them beyond local civil society organizations was AFAD. AFAD, which was established primarily to deal with natural disasters in Turkey, most significantly potential earthquakes, quickly adapted itself to the emerging man-made disaster along the Syrian border and, in a very short period of time, became one of the most significant refugee organizations in the world. It is important to understand how AFAD became such a success story and how it was able to touch the lives of the hundreds of thousands of Syrian refugees. Of course, political will and the commitments of Tu

Time to Reconsider the Region's Affairs
Next
Loading...
Loading...
We use cookies to ensure that we give you the best experience on our website. If you continue to use this site we will assume that you are happy with it.Ok