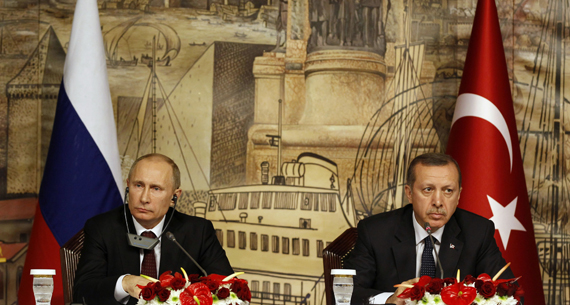 A New Era in Turkish-Russian Relations

IDEOLOGY AND SECURITY IN BILATERAL RELATIONS

Additionally, the perception of security was a key factor in influencing Turkish-Russian relations. Turkey joined the NATO alliance while the Soviet Union took part in the Warsaw Pact; despite their shared borders, they sustained only minimal political and economic relations. Turkish-Soviet relations remained limited due to ideological and security concerns.

The end of the Cold War marked a new era for Turkey and Russia and provided each with new opportunities. During the 1990s the perceived ideology and security threat faded away, multidimensionality prevailed and regional actors established close relations. While Turkey put into practice its zero problem policy with neighbors, Russia gave up exporting ideology and began to adopt a rational policy realizing the economic potential in the region.

THE NORMALIZATION OF TURKISH-RUSSIAN RELATIONS

Russia has attempted to gain importance in the world system particularly since the 2000s and President Putin began putting into practice his views expressed in his PhD thesis “The Strategic Planning of Regional Resources under the Formation of Market Relations” in 1997. Turkey established relations with the EU while increasing its influence in the Middle East, Balkans, Caucasus, and Central Asia. Both countries turned the normalization of relations into an opportunity.

Despite the Syrian conflict, Turkish-Russian relations continue to advance. Putin’s visit to Turkey, 11 critical treaties signed between the two countries, the annual trade volume reaching 30 billion dollars, Russia’s about 10 billion worth direct investment in Turkey and Turkey’s more than 6 billion worth investment in Russia…. All these demonstrate that differing foreign policies on Syria has not deeply affected the partnership of two countries.

From the onset of the Syrian crisis, Turkey and Russian took opposing positions. At the beginning of solution seeking process for the Syrian crisis Turkey ignored the critical and key role of Russia because Russia supported the regime. Turkey, instead, chose to engage in discussion with the region, including Iran, as well as negotiations with the UN, the EU and United States in order to resolve the crisis.

During Putin’s visit to Turkey, the fact that Syria was on the agenda indicated that Turkey had begun to consider Russia as a serious interlocutor in the resolution of the crisis and Putin’s statements regarding the Syrian regime indicated that Russia had softened its harsh policy. Putin’s visit to Turkey was positive. Both nations were willing to discuss their disagreements and both countries found common ground, sharing concerns about regional instability and the potentially disastrous aftermath of the Syrian crisis. As of today rational choices replaced opinions based on ideology and security threats in Turkish-Russian relations and a new era has just begun.

What Does Ergenekon Mean for Turkey's Center-Left Politics?
Next
Loading...
Loading...
We use cookies to ensure that we give you the best experience on our website. If you continue to use this site we will assume that you are happy with it.Ok