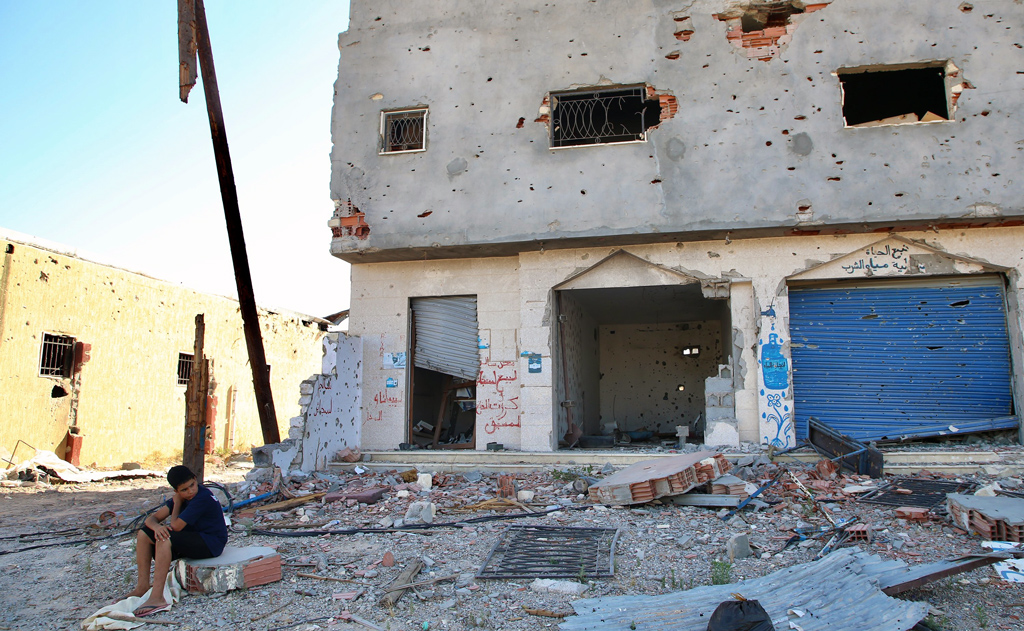 A child sits next to a building damaged by attacks carried out by forces loyal to putschist Gen. Khalifa Haftar, south of capital Tripoli, Libya, June 27, 2020. (AA Photo)

3 crucial points in the Libyan crisis

After Libya's internationally recognized Government of National Accord (GNA) – with Turkish military support – launched Operation Volcano of Rage against putschist Gen. Khalifa Haftar and his militias, conditions on the ground changed dramatically.

After Libya’s internationally recognized Government of National Accord (GNA) – with Turkish military support – launched Operation Volcano of Rage against putschist Gen. Khalifa Haftar and his militias, conditions on the ground changed dramatically.

The GNA gained the upper hand in Libya for the first time in the last several years and Haftar is now on the defensive. Though repeatedly rejecting diplomatic and political solutions to the conflict in the past, Haftar finally agreed to discuss a unilateral cease-fire and a return to the negotiating table.

After the retreat of Haftar militias, Haftar and his supporters announced the so-called “Cairo declaration,” calling on the two sides to respect a cease-fire. However, the request was rejected by the GNA and its main supporter, Turkey. Soon after, Egypt, a staunch Haftar supporter, declared the GNA’s control of Sirte and some other strategic regions a redline.

On one hand, the Haftar side wants to maintain its foothold in the city so it has some pull at the negotiating table. On the other hand, the government of GNA Prime Minister Fayez Sarraj is determined to end the occupation of the city to liberate the country from Haftar militias.

The reason for this change of discourse was the consecutive defeats of Haftar forces. The GNA forces are looking to crown their successful offensive by capturing three crucial points in Libya, namely the strategic city of Sirte, Jufra with its air base and the so-called oil crescent. If the GNA controls these three regions, Haftar would eventually lose the Libyan conflict. A defeat also means losses for his supporters, namely the United Arab Emirates (UAE), Saudi Arabia, Egypt, France and Russia. But why are these three points crucial for the balance of power in Libya?

The city of Sirte is important for several reasons. First, it is the hometown of former dictator Moammar Gadhafi and many tribes living in the region are still pro-Gadhafi. Nowadays, Haftar has been mobilizing thousands of foreign fighters to defend the city against the GNA forces. According to local sources and international media reports, thousands of Sudanese and Chadian foreign fighters as well as some 3,000 Russian mercenaries were stationed to the region. Second, the city, which was captured by Haftar without a fight, sits on the de facto border between the country’s west and east and determines the balance of power between the two sides of the country. Third, the region neighboring the city hosts one of the country’s richest oil reserves – the most important strategic asset. The city also connects the strategic Jufra region to the Mediterranean Sea.

The Jufra region and Jufra air base are two of the most strategic places in Libya. According to GNA forces as well as observers, the road to the liberation of the country passes through the Jufra air base, which accommodates the forces backing Haftar, especially Russian aircraft and Wagner mercenaries.

According to the U.S. Africa Command (AFRICOM), Russia has deployed at least 14 fighter aircraft to Jufra air base. It is claimed that similar to Syria, Russia intends on establishing a military base in Jufra and a naval base in Sirte. Besides the Russians, the air base hosts mercenaries from different countries, including Ukraine, Serbia, Sudan and Chad. Furthermore, gaining the Jufra air base is essential for controlling the oil crescent.

The oil crescent, which stretches from Ras Lanuf to Sirte and to the Jufra district, accounts for more than 60% of Libya’s total oil production. Therefore, it is vital for financing the civil war and a point of conflict and competition among the fighting sides. Besides UAE financial support for Haftar, he has been exploiting the country’s oil resources to finance the mercenaries brought in from different countries, such as Sudan and Chad.

If the GNA can take control of the three previously mentioned critical points, Haftar will lose his influence in the conflict. Thus, the GNA will be able to protect Libya’s political independence and national integrity. Otherwise, as long as Haftar controls these three regions, he will keep the country divided.

The states supporting Haftar, such as France, Russia, Egypt and the UAE, will try everything in their power to keep the country divided. These states will exploit tribal and political differences to maintain the division of Libyan territory. Unfortunately, Western countries’ efforts, including those of Italy, the U.S. and Germany, to establish a cease-fire remain unsuccessful and, in fact, contribute to the division of the country rather than a peaceful solution.

Last chance for Angela Merkel
Next
Loading...
Loading...
We use cookies to ensure that we give you the best experience on our website. If you continue to use this site we will assume that you are happy with it.Ok