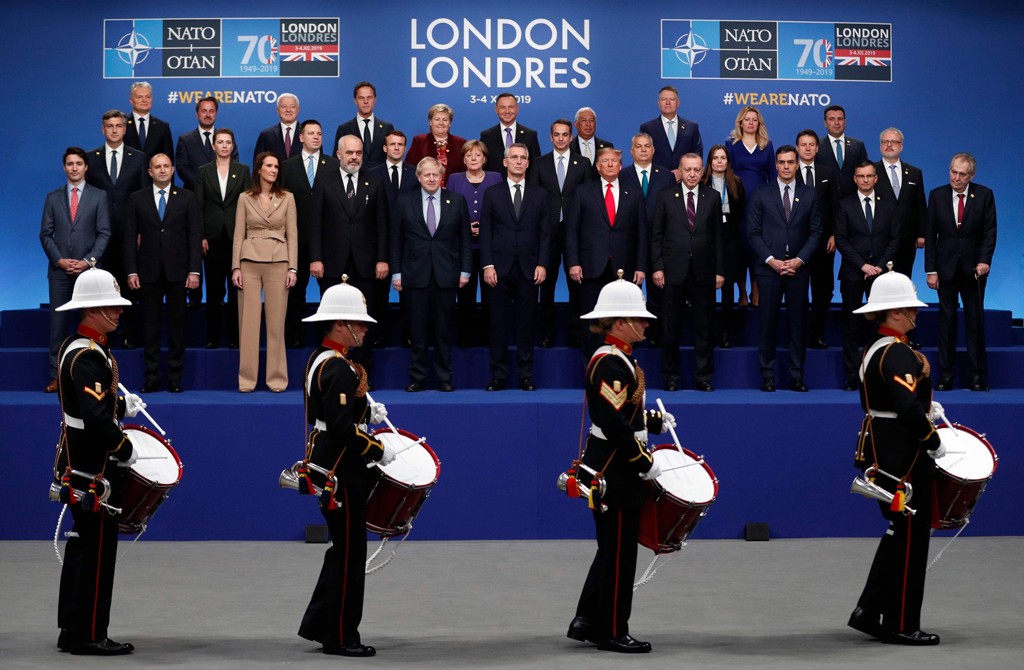 Heads of government watch a marching band perform as they pose for a family photo at the NATO summit at the Grove hotel in Watford, northeast of London, Dec. 4, 2019. (AFP Photo)

2nd round in Erdoğan-Macron squabble

Upon Ankara’s determination to protect its interests in the Eastern Mediterranean, Macron convened the southern European countries in Corsica and said, “We must be tough with the Turkish government and not with the Turkish people, who deserve more than the Erdoğan government.”

Delivering an opening speech at the National Will Symposium on Democracy and Freedom Island, also known as Yassıada, on Sept. 12, he said, “Mr. Macron, you’re going to have more problems with me.”

Then, “Macron, you have little time left; you are a goner,” he said.

There is always a polemic between the two leaders either on the phone or in front of the press. It is known that Erdoğan lectures Macron on world politics and French history during telephone conversations.

Having held diplomatic meetings with former French presidents Jacques Chirac, Nicolas Sarkozy and Francois Hollande, Erdoğan finds Macron “inexperienced” and “naive.” As his body language in bilateral meetings reveals, Macron is overwhelmed by Erdoğan’s experience. However, Macron is continuing his anti-Erdoğan rhetoric in hopes of gaining traction in Europe. Interestingly enough, despite not having a coast in the Eastern Mediterranean, France attempts to play the role of “the gendarmerie of the EU” against Turkey, which has the longest coasts on this sea. He is abusing Greece for his own “incompetent ambitious” moves in order to sell weapons. Such moves are doomed to fail against Erdoğan. However, this is not the first time Macron has attempted to criticize Erdoğan.

Let us remember that when Macron said, “What we are currently experiencing is the brain death of NATO” during Turkey’s operations in Syria and criticized Erdoğan, the Turkish president, in return, advised the French president to “deal with his own brain death.” Macron’s criticism of Erdoğan, this time aimed at encouraging Greece, garnered support from Marine Le Pen, the leader of the National Rally Party, not from southern European countries. Well, who is Le Pen?

She is the leader of the French far-right, which will gain strength if Macron fails. I do not think German Chancellor Angela Merkel, who mediates between Turkey and Greece, is happy with Macron’s polemics. Merkel does not oppose Macron’s adventurous policies and polemics for two reasons.

First, the United States is putting pressure on Berlin over Nord Stream 2 and military spending in NATO. Second, she is afraid that Macron’s failure might create a similar mood in Europe to that in 2017. She is aware that a wave of the far-right that could start with Le Pen could bring about the end of the European Union. Merkel does not want Macron to fail, but she also sees the risk of a new wave of refugees heading for Europe. She wants to work with Erdoğan, but she also has a hard time reining in those in Europe who say, “Let us teach Turkey a lesson.”

And Erdoğan, of course, is not bothered by Macron’s polemics. He sees that his “red lines” are futile, and he values the mediation that Merkel is conducting.

He knows that southern European and Eastern European countries within the EU do not want to have problems with Turkey. Meanwhile, Macron’s tactic of supposedly separating “Turkish people and Erdoğan” is quite funny.

Despite his inexperience, Macron should not be believing it either.

It is obvious he is doing all this for the sake of his own domestic politics.

Some journalists realize that targeting the Turkish president about the East Mediterranean issue furthers the mobilization of Turkish public opinion and therefore, they rush to deduce that such polemics only serve Erdoğan’s agenda.

The way things are indicates that the polemics between Erdoğan and Macron will see the third and fourth rounds as well.

What does the West want from Turkey?
Previous

Turkey in the Eastern Mediterranean: Maritime Disputes and Geopolitical Competition
Next
Loading...
Loading...
We use cookies to ensure that we give you the best experience on our website. If you continue to use this site we will assume that you are happy with it.Ok