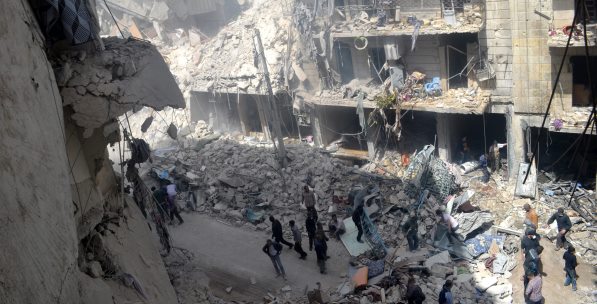 SETA Foreign Policy Director Ufuk Ulutaş in an assessment to the Anadolu Agency (AA) said that the silence of the United Nations (UN) and the international community legitimizes massacres committed by the Bashar al Assad regime.

In an assessment he made to the Anadolu Agency (AA), SETA Foreign Policy Director Ufuk Ulutaş stated that “the video images of attacks sent from the East Ghouta Suburb in the Syrian capital Damascus, where chemical weapons were used allegedly, revealed that people died without having any injuries, and that reinforces the claims.”

In his assessment Ulutaş conveyed the information that over 30 missiles were fired from the region, and attacks by fighter jets were committed in the morning hours. “When the images are viewed, it is seen that many people including children died without having any injuries, and these images reinforce in particular the possibility that chemical weapons were used,” said Ulutaş. The only institution to prove the use of chemical weapons in Damascus is the UN Investigation Committee, and following an investigation a final report will probably be presented, added Ulutaş.

The scene of the attack is an area that the opponents have held and controlled for a long time, and attacks against the Assad regime in a few regions may be intensified and clashes in the city of Latakia may escalate following this latest attack on civilians Ulutaş warned.

According to the SETA Foreign Policy Director, the UN delays to take action in any issue regarding the Syrian crisis. “The UN should have taken many steps in Syria so far. The silence of the UN or the international community, as in Egypt, in a sense legitimizes the massacres committed by the rulers in these countries against their own people or at least encourages them. So, I think the Assad regime takes strength from the silence of the international community in the face of the incidents in Egypt,” he said.

As for the UN Investigation Committee’s actions, Ulutaş said that they received information about the Committee’s facing some restrictions by the Assad regime, adding “The most important decision here by the UN Security Council is a decision of condemnation. Even if it is proven that chemical weapons were used in Syria, I don’t think the UN will take a game changing step because of both the role of Russia and the permanent members’ being straddle or their reluctance or difficulties to take a clear position.”