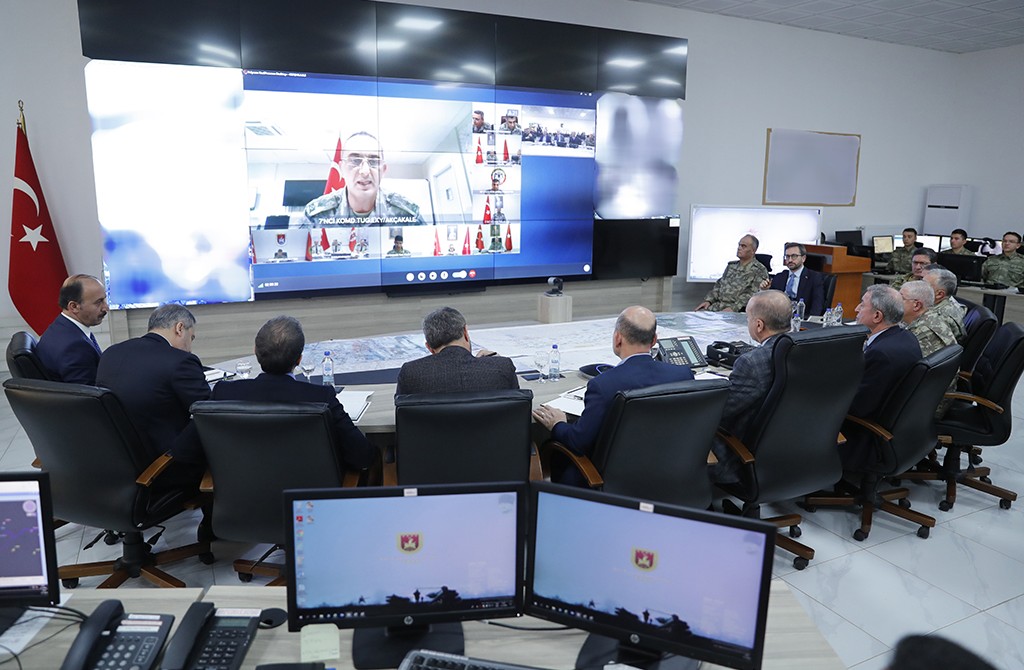 Turkey and Russia conducted their first joint ground patrols in northeastern Syria on Friday, as per the Sochi agreement. Eight armored vehicles, accompanied by drones, patroled the area between 40 kilometers east of Ras al-Ayn and 30 kilometers west of Qamishli, the Turkish Ministry of Defense said.

Again under the Turkey-Russia agreement, Ankara will establish 13 observation posts in the area, enabling it to carry out armed operations on the ground. Turkey, with its extensive intelligence capabilities in northern Syria, will closely monitor Russia’s implementation of the agreement as well.

Although Moscow has kept its promises until today, it remains unclear how the Bashar Assad regime, Russia’s client, will engage the People’s Protection Units (YPG), the terrorist organization PKK’s Syrian offshoot, and what it would take for the Turks to use hard power. Both Moscow and Damascus are aware of Turkey’s determination.

The Syrian constitutional committee met for the first time in Geneva on Oct. 30 and made good initial progress. Pressure from international stakeholders, starting with Russia, Turkey and Iran, makes it more likely that the committee will function effectively. What all parties agree on, for now, is the need to preserve Syria’s territorial integrity and political unity. It is also noteworthy that this middle ground is an important starting point for Syria’s new constitution. Yet there are many issues to discuss.

It is possible to assume that the constitutional committee will face certain challenges. Emboldened by the most recent developments in Syria, Bashar Assad’s negotiators could take steps to disrupt the committee’s work. Depending on the level of Russia’s commitment to peace and a political transition, the constitutional body will function effectively. If Moscow applies proper pressure, Damascus won’t be able to stall proceedings.

One thing is clear: No country will invest in Syria until the various parties negotiating in Geneva agree on a timeline for the country’s political transition. Even China does not invest in areas under Bashar Assad’s complete control. All governments are seriously concerned about the prospect of foreign investors getting kidnapped. Meanwhile, neither Russia nor Iran has the economic power to facilitate Syria’s economic development alone. Needless to say, the U.S. and Europe are unlikely to take the risk.

To be clear, Turkey is the best-suited country to contribute to its neighbor’s reconstruction efforts. Having hosted 3.7 million refugees for eight years, the Turks have the potential to revive trade and improve Syria’s investment environment against the backdrop of political transition. At the same time, Turkey has a vested interest in Syria’s territorial integrity and stability.

Therefore, the Turkish government’s current move to establish a safe zone and resettle Syrian refugees in northern Syria is a genuine contribution to its neighbor’s future.

President Recep Tayyip Erdoğan last week said he would discuss with U.N. Secretary-General Antonio Guterres his administration’s plan to establish a “refugee city” between Ras al-Ayn and Tal Abyad. He added that Turkey will ask international donors for help and, failing that, encourage Turkish businessmen to take action.

President Erdoğan is committed to his safe zone plans for Syria which he unveiled at the U.N. General Assembly in September. He wants to repatriate Syrian refugees there. Going forward, Ankara will use all diplomatic measures, including the threat of opening the floodgates to Europe, to persuade European leaders.

Refugees will be the top item on the agenda of Erdoğan’s upcoming meeting with British, German and French leaders. For their own sake, European democracies would be wise to seriously consider Turkey’s offer. If President Erdoğan feels that his move is being stalled by the Europeans, Turkey will find the money to build a prototype of its safe zone unilaterally and show the world what it can accomplish.

For Turkey, the repatriation of Syrian refugees is no less important than preserving Syria’s territorial integrity.

US gains nothing destroying its partnership with Turkey
Previous