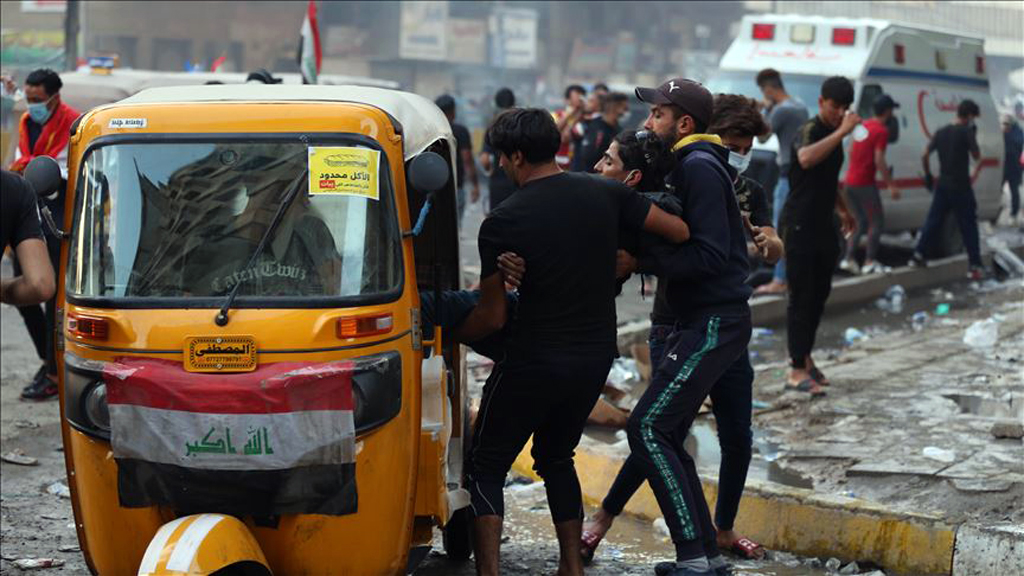 Protestors, affected from the gas bomb thrown by security forces, are seen during the ongoing anti-government demonstrations, at Al-Khilani Square in Iraq's capital Baghdad on November 10, 2019. ( Murtadha Sudani - Anadolu Agency )

The world has been witnessing popular demonstrations across the globe recently. From Chile and Bolivia to Hong Kong, demonstrations have cropped up against governments and ruling elites..

The protests in Iraq started on Oct. 1, on the day of the first anniversary of Adel Abdul-Mahdi’s government. According to national and international observers, more than 300 civilians lost their lives and thousands of others were wounded. The protesters are largely Shiites, while Sunni Arabs and Kurds remain distant.

Like other regional demonstrations, protests in Iraq have two dimensions – domestic and regional. The protests are mainly against domestic problems such as corruption, economic crises, poverty, unemployment, mismanagement, lack of public services and political instability.

On the one hand, the government fails to deliver basic public services and is unable to protect its people against domestic militias and different paramilitary groups. State institutions are extremely weak and cannot function properly. On the other hand, the ruling elite and rich groups and families share the oil income among themselves and transform their investments in other regional countries such as Jordan and the United Arab Emirates. Furthermore, sectarian politics and the rising role and effectiveness of religious groups and other non-state actors contribute to political instability.

The second dimension of the demonstrations is external interventions. Protesters criticize external intervention into Iraqi politics. While Iran has been supporting the government, the United States has been strongly supporting the protesters. In one sense, there is a continuous struggle between pro-Iranian Shiite groups and pro-American Shiite groups.

Iran, as the strongest regional actor intervening, and even determining, the domestic politics of the country, is deeply and directly involved in Iraqi politics and therefore became the target of the demonstrations. Iran, as the backer of the Iraqi government, is calling for an end to the protests at all costs. According to Agence France-Presse (AFP), the leader of al-Quds Force, Qasem Soleimani, met with some leading Iraqi figures such as al-Amiri (of the coalition of Fatih), Ammar al-Hakem (of the coalition of Hikmah), al-Sadr (the coalition of Saairun) and Mohammad Reza Sistani, the son of the Shiite cleric Ayatollah Sistani. After the meetings, all sides agreed to support the government of Abdul-Mahdi to keep him in power, and to make some constitutional reforms.

After securing the support of certain religious and political groups, the government began to respond to the protesters more harshly. Police and security forces began to besiege the places of demonstrations, to close bridges and roads leading to demonstration areas and to use excessive force against civilians. Security forces, who have used live fire, tear gas and rubber-coated bullets, are accused of ruthlessly targeting civilians.

Likewise, the United States, who wants to weaken the effectiveness of Iran in the country, has been supporting the demonstrations. U.S. Secretary of State Mike Pompeo has accused the government of corruption and demanded that it refrain from using force against protesters. Pompeo accused Iran of being responsible for the corruption that led to the protests in Iraq and stressed that the Iraqi people have the right to free themselves from Iranian meddling. The White House also issued a statement on Nov. 11 calling for early elections and the end of Iranian interference in Iraq.

In conclusion, the protests began as a natural reaction against social, economic and political developments in the country. However, after the interventions of external actors, the protests have become purely political, serving the interests of some regional and global powers. These powers exploit and instrumentalize protests against unfriendly governments. If intervening external factors succeed, the protests will end with a governmental change, as in the case of Sudan. Otherwise, the demonstrations could devolve into a civil war between opposing political factions.