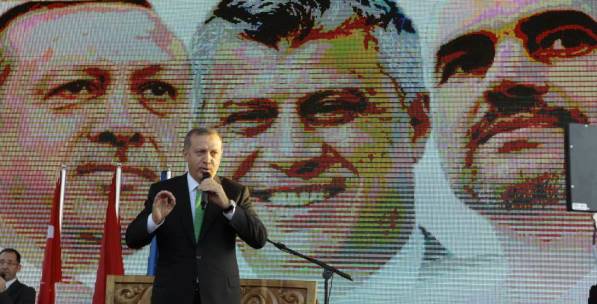 What matters is to establish relations between countries and societies on the grounds of a common future rather than experiences, enmities and prejudices of the past.

Prime Minister Recep Tayyip Erdoğan paid a one day visit to Kosovo on October 23, 2013. Even though Erdoğan visited Kosovo to attend the official opening of the Pristina Adem Jashari International Airport’s new terminal which was renewed by the consortium Limak-Aéroports de Lyon, this visit had a special significance in that it was paid on the eve of critical local elections to be held on November 3, 2013 in Kosovo. The newly-elected Albanian Prime Minister Edi Rama accompanied Prime Minister Erdoğan in the official opening and this opening turned into a show of strength by Hashim Thaci, the prime minister and the leader of the party in power, the Democratic Party of Kosovo (DPK). These three leaders spoke to people in Pristina and speeches turned into a big rally as the government declared a one-day holiday for schools and people showed an intense interest in these speeches. All these will probably contribute to Thaci in local elections.

Erdoğan visited Kosovo on the eve of local elections and he probably knew that Thaci would benefit from this visit in his election campaign thus this visit can be construed as an implicit support of Erdogan for Thaci in local elections. The close ties between the two leaders were already known. Furthermore, Erdoğan’s support not only reflects the will of Turkey but also Turks in Kosovo because Thaci has good relations with Turkish community in Kosovo. The leading Turkish Party, the Turkish Democratic Party of Kosovo is already a coalition partner in government. He has recently visited the Turkish Justice Party of Kosovo established by those who broke away from the Turkish Democratic Party of Kosovo. The Turkish Justice Party of Kosovo will run for elections for the first time. He also signed a coalition agreement with these two parties to nominate one candidate for the Prizren Municipal elections. He received a wide support from Turkish community in the country owing to these alliances.

Kosovo may be a small country; however, it has a significant position as it is located at the center of Balkans. The U.S. is popular in the country owing to the NATO intervention in particular. Furthermore, the European culture and politics have a great influence on the country in the name of Europeanization in recent years. Country’s relations with Albania are based on “one nation two state” policy. Serbia has less and less influence on the country since the 1990s. The Gulf countries, on the other hand, grant significant amounts of financial aid to support and shape Islam in the region. Above all, Turkey has a special place in the eyes of Kosovo. Common history and cultural ties between two countries, the Turkish minority living in the country since the days of the Ottomans, the support of Turkey for Albanians in Kosovo during the war, Turkey’s presence in the NATO intervention, Turkey’s recognition of Kosovo earlier than many other countries and Turkey’s investment in this country can be cited among the reasons for this very special place. Given the sympathy towards Prime Minister Erdoğan, today Turkey has a very exceptional place in the eyes of the Kosovar society.

On the other hand, there are those in Kosovo who are skeptical about Kosovo’s close ties with Turkey. Super patriotism and extreme Eurocentrism lie behind this suspicion. The Albanian nationalism, which was presented as an antithesis against the Ottoman Empire and Turkish people at the beginning of 20th century, is still on the minds of numerous people. The pro-European liberals are concerned that the society will turn to the East and will not adopt the European values as the country strengthens its ties with Turkey; therefore, they want only economic relations with Turkey while limiting cultural and religious bonds with the country. Today, even the newspapers close to the governing part write that Thaci should not take Erdoğan as a model giving the Gezi protests, and the arrest of journalists among others as exam

Democratization and the Constitution in Turkey
Previous